Question: What's funny about this picture? 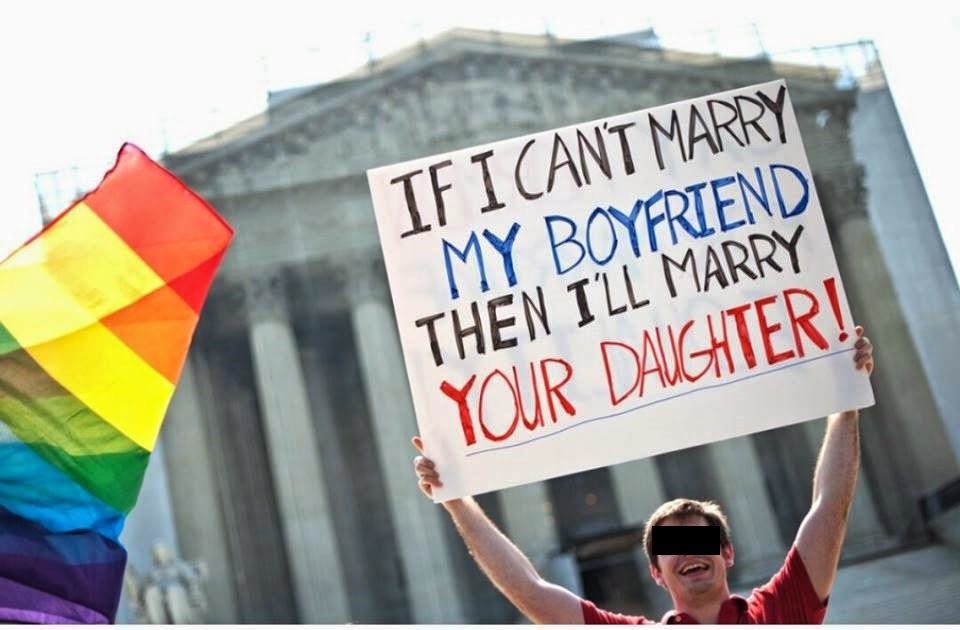 So I attended a wedding yesterday. The son of a lifelong friend and his girlfriend of 6 years, both in their mid-20s. After the priest asked if anyone in the congregation knew of any reason why the couple shouldn't marry, he then asked the couple the same thing. "Do either of you know of a reason why you shouldn't marry? If so, please confess it now." In the silence that followed the question, I felt like I'd been stabbed in the heart.

I've felt an unshakable sadness for the rest of the weekend, and even now as I write this. Would my ex really have come clean? Would anyone? I asked my ex-husband directly before we ever became engaged, and he said no. Not gay. Nope. Nada.  Would it have been harder to lie to God, in front of witnesses? Or is the lie the most important thing?"

("Hey, ha ha, if I can't marry my boyfriend, then I'll marry your daughter!")

You know what, laughing guy? You SHOULD be able to marry your boyfriend. Absolutely. Let's all work towards that. It's only fair and it's just. Everyone should have equal rights under the law. In fact, many of us would (and have) marched right next to you.

But to take such a cavalier attitude about all of the broken hearts of those unsuspecting daughters who you gleefully suggest gay men marry? So you ask for respect -- but think it's funny to shatter other people's lives?

Here are some of the responses to my Facebook post, edited for anonymity and privacy. They are from both men and women who have been on the receiving end of your taunt. Put your sign down and have a listen. Pretend it's your mom, your sister, your best friend speaking:

"My sorrow is that the priest who married us knew my ex had same-sex attractions, but told him to marry me and they'd go away. All these years later, I've lost my faith. And I'm still not healed from all the levels of betrayal."

"That's the moment I've run through my head so so many times. I always fantasize someone from the back shouting out 'He's gay and gonna dump you when you're [in your fifties]!'"

"It appears the lie was the most important thing."

"His father, brothers, his ex, and probably many others knew."

"Exactly. There were people in the crowd that knew. The guy from [another state] who showed up unannounced, for one."

"This hit too close to home. My husband admitted when confronted last year that he knew the truth even as we were meeting with the priest prior to our marriage. So no, he would have kept quiet if that had been asked at our wedding. Instead, I have lived an entire marriage based on a lie. Even found out he had been having sex with men in my home. I told him he had the chance to call off our wedding. I had already been divorced once and lived through it. I certainly could have done it a second time. Instead, I have to start my life over at [this age]." 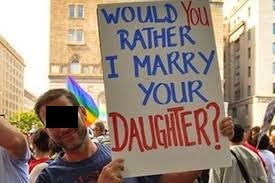 "After months of lies and manipulation after he came out, he finally admitted that he knew since ever he could remember. I stumbled onto the fact that he'd had sex with men in high school and college, and all throughout our marriage. I clearly remember my wedding day knowing this was the best and right thing, and that we loved each other. I had known him and his family for years."

"My ex hit on one of our groomsmen, [who] told me only after I filed for divorce 30 years later. I'm not sure I will ever get over [those betrayals]."

"When we were at the altar the priest's first words [to me] were, 'This is your last chance,' with a grin on his face. My ex looked me right in the eyes and said 'Go for it.'"

"I am not a religious [person]. I find the universe, creation, almighty in its own rights, and dogmatic storytelling a distraction that gets in the way. So when I stand before and give my word to my concept of God and before my fellow Man, it means a lot to me. It did.

And then it all washed away."

So, Laughing Guys, here's the answer to the question, "What's funny about this picture?"

To schedule a face-to-face or FaceTime session with Kimberly Brooks Mazella, LPC, please go to my website at www.kimberlybrooksmazella.com..

Posted by The Straightforward Project™ at 2:33 PM 7 comments: