Friday night's interview with Bruce Jenner by Diane Sawyer was a turning point in our collective understanding of the struggle of transgendered people. To know that this All-American hero, the perfect specimen of handsome masculinity and fitness, has been tormented by gender identity confusion since childhood, was painful to hear. Reading Twitter and Facebook posts during and after the interview revealed expressions of compassion and encouragement. His first two wives and the majority of his children offered their unconditional love and support, with sincere wishes for his happiness.
He's out. The burden of the secret has been lifted. He can finally move forward with his transition into Her. Pictures taken of him yesterday morning revealed the smile of a man who was free at last. And the morning after, we celebrated his courage and feel empathy for the years of pain. I, for one, am genuinely happy for him. Everyone deserves to live an authentic life.
But Jenner's somewhat tidy ending misses a huge chunk of the story, because his life overlaps so many others'. Although life can't really be neatly depicted in a drawing, I think my Venn diagram (below) pretty clearly lays out important relationships that are now being or have been affected by Jenner's gender identity struggle. And it's not just in his case, of course, but is true for every LGBT person who comes out during a marriage. Every circle has an equally important story to tell. 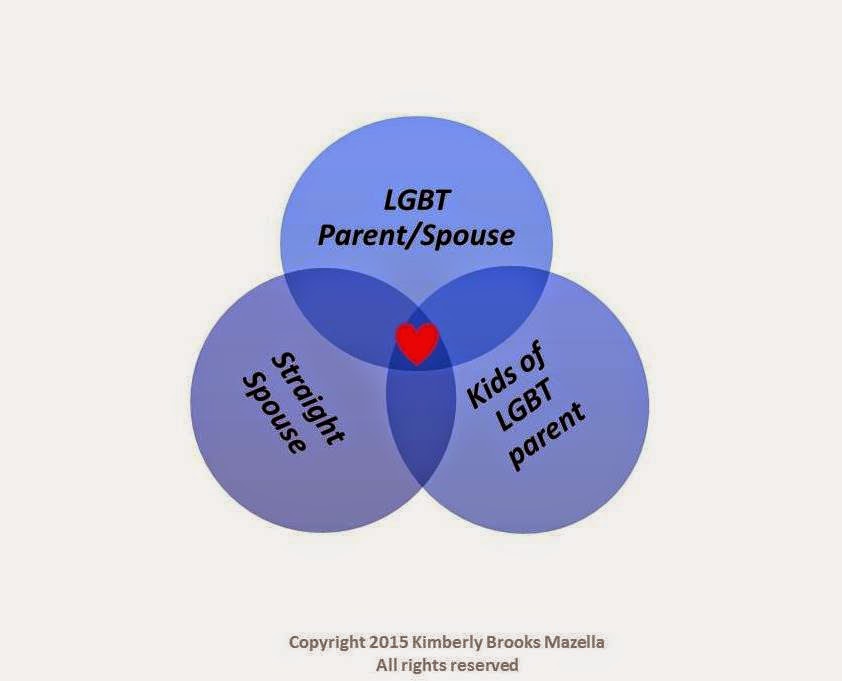 First, let's look at the kids. It's not unusual for a child to sense that something is "off" in the family. They may find evidence that Mom or Dad is LGBT; it might be a photo, a text accidentally read, or maybe one parent has a new same-sex friend that they're spending more time with. Or in Jenner's case, being "caught" wearing women's clothing. And for the child(ren), the internal dialogue might sound like this: "Who do I tell? Can I ask my parent(s) about it? I have this secret and it's too much for me. I'm so mad at my mom for marrying him! I'm so mad at my dad for being gay! I'm so embarrassed! What are my friends going to think? Does this mean I'm gay, too?"

The second circle represents the "straight spouse." Or, as one attorney I worked with so indelicately put it, the "left-behind spouse." That spouse just had his/her world turned upside down. Sometimes it happens abruptly, and sometimes there is a growing suspicion that reveals itself over time. There are often years of a sexless marriage. We wonder, "Am I not attractive enough? Sexy enough? Manly enough?" We buy satin sheets, sexy lingerie, her favorite flowers. We make his favorite meal. Sometimes we even directly ask, and get a defensive denial in response. It is crazy-making and self-esteem shattering.

The strongest punch to the gut for the straight spouse is finding evidence of infidelity. The genitalia close-ups on Craigslist's M4M page. The sex toys discovered in a suitcase after a business trip. Love letters left out in the open. For your LGBT spouse, it's a new life. For you, it's the death of everything you thought you knew or thought you had.

As you can see, there is a lot of overlap between the kids' and the spouses' internal experience. The description I hear most frequently is feeling like Alice in Wonderland after falling down the Rabbit Hole. Things you thought were real aren't, and beliefs you had about life are blown to smithereens in an instant. And if no one is talking about it, it's all that much more discombobulating.

The final circle is the person who is coming out as LGBT. Bruce Jenner's description of his years of internal conflict was heartbreaking. Although times are changing, the truth is that historically being gay or transgender has been more than just "not OK"; people are rejected by their families, kicked out of churches, denied jobs. Even killed. I know one person whose mother threatened to kill herself if he was gay. So he's married instead. And miserable. As Bruce Jenner has shown us, it can take decades to come to terms with one's gender identity and/or sexual orientation, and the process for some is agonizing. And lots people get hurt in the process, even if that was never the intent. Some LGBT folks truly believe that if they can just find that right person, they can create a "traditional" life and tamp down those authentic-but-unacceptable feelings. Too many of us know, of course, that it simply doesn't work that way.

Every person in that Venn diagram has a story to tell. Some experiences and feelings are the same. Some are different. And all of the stories are valid and true.

Which brings us to the heart in the middle of the circles, that place where all of the lives overlap. It's the place of communicating and understanding one another's experience, one another's feelings. Understanding does not mean forgiving; it may not even mean you're less hurt. Less angry. But seeking to dwell in that heart space MUST be the goal if we're ever going to heal as family members, as individuals, as a society. That heart is the place where four things must happen:
What does your Venn diagram look like? Are you firmly planted in your circle, certain that yours is the only story that counts?

Or are you moving towards your heart?

To schedule a face-to-face or FaceTime session with Kimberly Brooks Mazella, LPC, please go to my website at www.straightforwardcounseling.com. Or contact me at kbmazella@gmail.com.


Posted by The Straightforward Project™ at 5:46 PM 4 comments: Links to this post